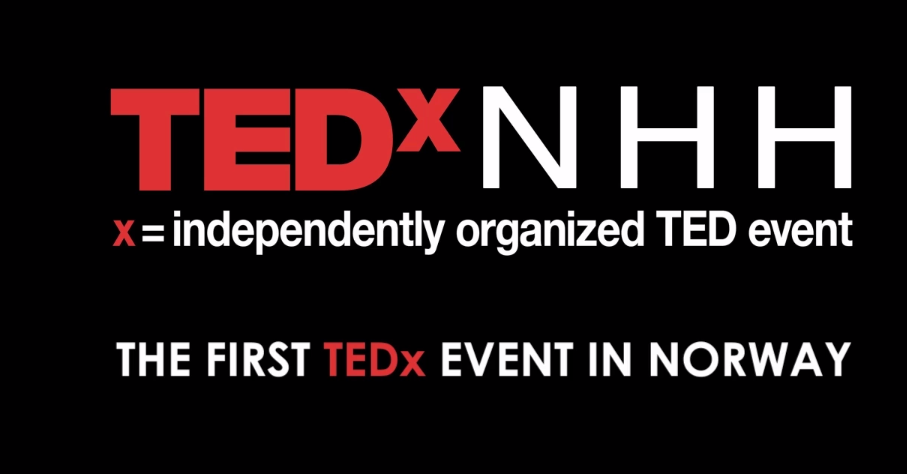 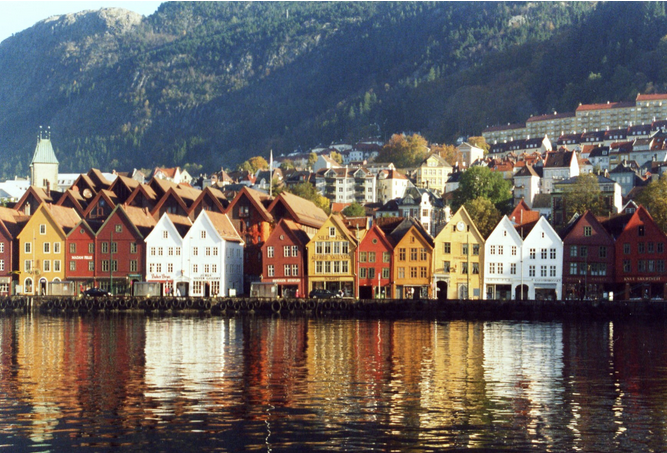 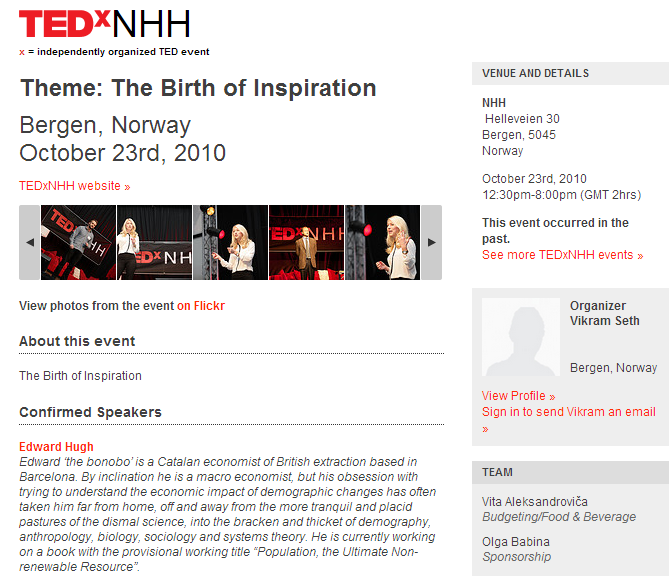 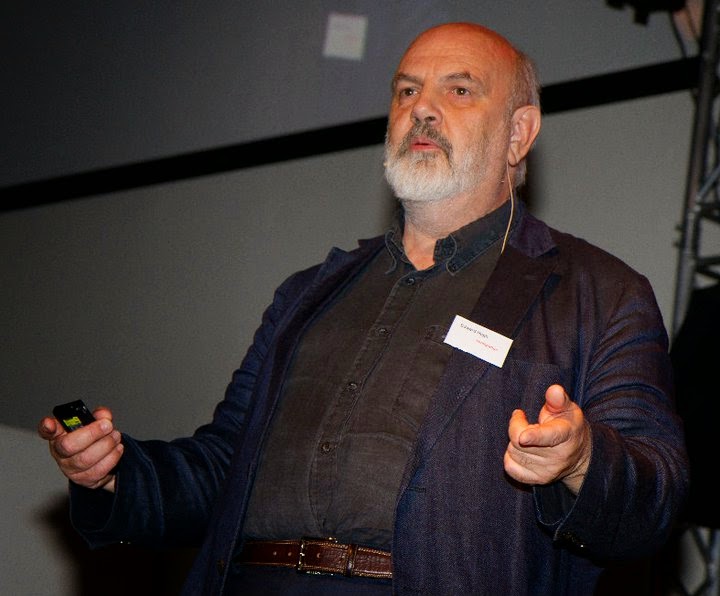 No other force is likely hot shape the future of national economic health, public finances, and policymaking as the irreversible rate at which the world's population is ageing. U.N. figures show the proportion of the world's population aged over 65 is set to more than double by 2050, to 16.2% from 7.6% currently. By the middle of the century, about 1 billion over 65s will join the ranks of those classed as of non-working age. The cost of caring for these people will profoundly affect growth prospects and dominate public finance policy debates worldwide. 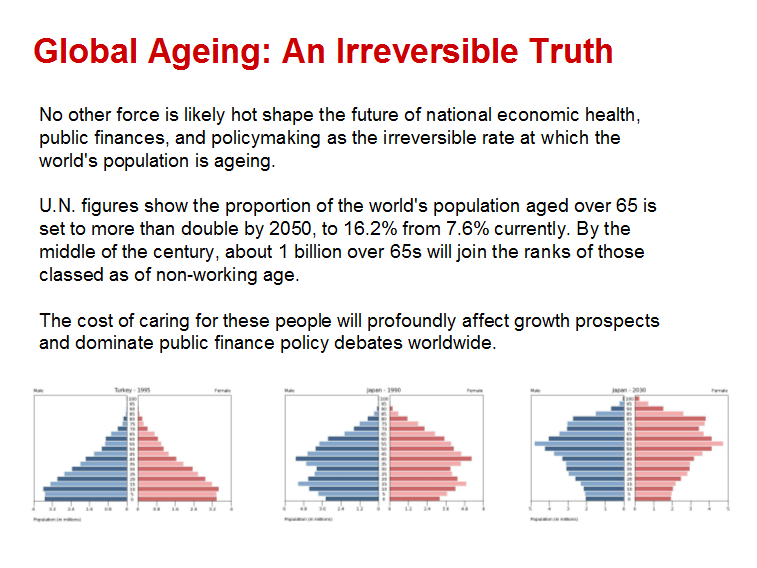 • The pace of aging varies greatly across countries and regions,
• Most pronounced and rapid in those countries that for decades have had fertility rates below replacement levels - Japan, German speaking countries, Southern and Eastern Europe.
• The median age of populations in Europe as a whole will increase from 38 today to 49 in 2050 (with significant differences between countries), and at this point it will be over 20 years above the estimated median age in Africa (which will be the youngest continent).
• Spain - with half its population older than 55 by 2050 – is expected to become the oldest country in the world, followed closely by Italy and Austria, where the median age is projected to be 54.

Not only will populations get older, in many cases they will shrink. According to the latest forecasts, Germany’s total population will shrink from its current 82 million to somewhere between 69 and 74 million by 2050, while the proportion of people aged 65 and older is projected to rise from just under 20% today to just over 33% by 2050, depending on immigration. At the same time, the number of very elderly (those aged 80 and over) will nearly triple to as much as 15% of the total population.

Shrinking As Well As Ageing

Eastern Europe Especially Badly Affected Among emerging economies, the situation in the East of Europe stands out as by far the worst in the short term. In 2025, more than one in five Bulgarians will be over 65 - up from just 13 percent in 1990. Ukraine’s population will shrink by a fifth between 2000 and 2025. And the average Slovene will be 47.4 years old in 2025—among the oldest in the world. Between 2000 and 2005, the only countries in the world with population declines of more than 5,000 people were 16 countries in Eastern Europe and the former Soviet Union The fastest aging countries on the planet over the next two decades will be in those of Eastern Europe and the former Soviet Union.The entire region is projected to see its total population shrink by about 23.5 million. The largest absolute declines will be in Russia, followed by Ukraine and Romania.

The magnitude of China’s coming age wave, is simply staggering. By 2040, assuming current demographic trends continue, there will be 397 million Chinese over 65 - more than the total current population of France, Germany, Italy, Japan, and the United Kingdom combined. China Too China’s ageing is characterised by the unusual speed with which it is occuring. In Europe, the population over 65 passed the 10 percent threshold back in the 1930s and will not reach the 30 percent mark until the 2030s, one century later. China, on the other hand, will traverse this same distance in a single generation.

Norway Is Ageing More Slowly Than Most 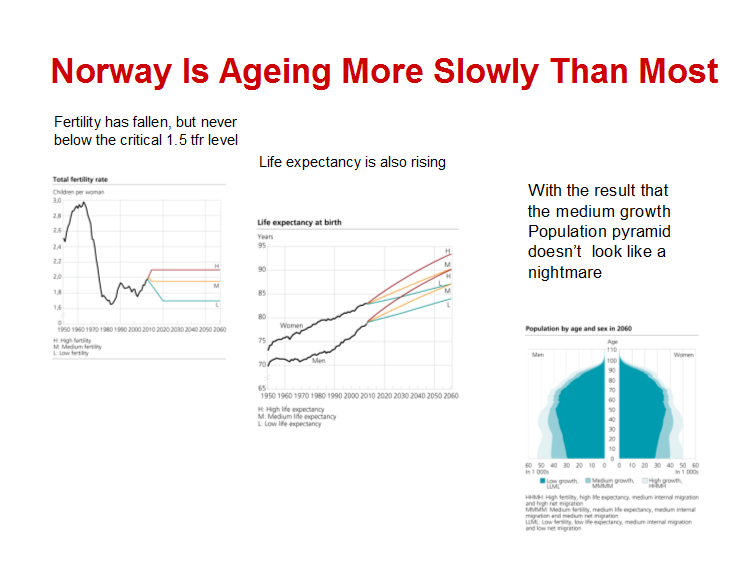 Fertility has fallen, but never below the critical 1.5 tfr level Life expectancy is also rising With the result that the medium growth Population pyramid doesn’t look like a nightmare. 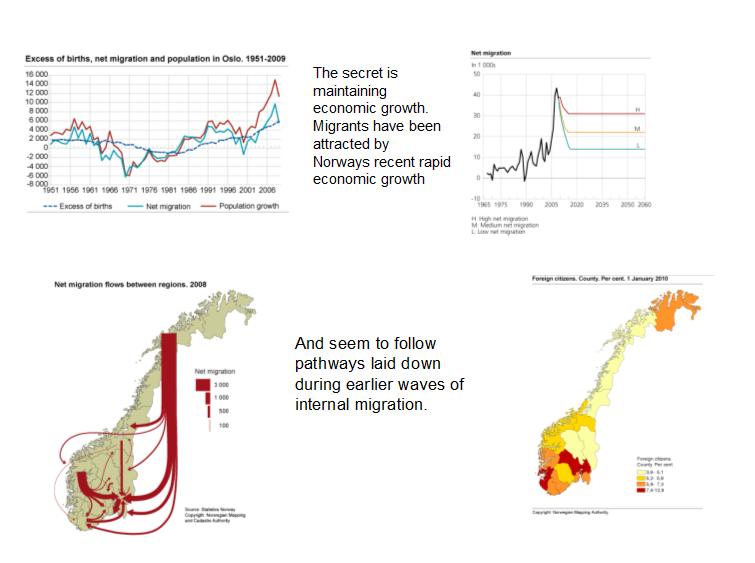 The secret is maintaining economic growth. Migrants have been attracted by Norways recent rapid economic growth And seem to follow pathways laid down during earlier waves of internal migration.

As far as we understand the issue at this point, population ageing will have impacts which could be categorised under four main headings:

i) it will affect the size of the working age population, and with this the level of trend economic growth in one country after another
ii) it will affect patterns of national saving and borrowing, and with these the directions and magnitudes of global capital flows
iii) through the saving and borrowing path the process can influence values of key assets like housing and equities
iv) through changes in the dependency ratio, ageing will influence pressure on global sovereign debt, producing significant changes in ranking as between developed and emerging economies.

Japan and Germany are currently the two oldest societies on the planet. With median population ages of around 45. They are both heavily “export dependent”. Just a coincidence? Also trend GDP growth in both these countries has fallen back strongly, and both countries are now highly sensitive to the impact of external currency and demand shocks.

Germany And Japan: Examples (to try) Not to Follow?

“There may be many reasons to favour increased immigration....But it would be wrong to advocate increased immigration as necessary to deal with the fiscal consequences of an ageing population, or as a means to avoid large future tax increases or benefit reductions”. Marty Feldstein - The Effects of the Ageing European Population on Economic Growth and Budgets: Implications for Immigration and Other Policies

Two Principal Points i) immigration is not necessary to deal with the fiscal consequences of ageing populations ii) it is false that immigration constitutes a way of handling ageing which enables you to do so without large tax increases or benefit reductions since increased immigration would do little to reduce the future fiscal burden. The increased revenue from a large rise in immigration would finance only a small part of the coming rise in the cost of pension and health benefits.

My opinion - Feldstein is both right and wrong He is right that immigration alone won’t be enough to address the problems we face. We also need structural reforms in labour markets to encourage higher participation rates. We need to move away from Paygo to fully funded pension systems. But he surely goes too far. Migrants can help keep our welfare systems afloat as we transit from one system hot the other. They help fill the gap of the “missing generation” of contributors. Most migrants are in their 20s and 30s, so they will also form homes and families, helping push the birth rate up a bit.

Significant migrant inflows since 2000, but no net impact on the decline in trend growth. Trend growth could now be below 0.5% per annum - and could turn negative during this decade.  Human Capital Loss Gives The Key To The Italian Problem

• It is hard hot say why Italy has fared so badly in terms of growth, given the recent strong immigration.
• A number of factors involved, but one that stands out clearly in the annual brain drain out of Italy.
• Each year somewhere between 5% and 10% of Italian university graduates leave their country, never to return.
• So some of the migration represents a “bad swop” of highly qualified people for people with far lower education levels.
• Reform in Italy’s “insider-outsider” labour market, and changes making it easier for young people to start their own businesses would be a big step forward.

Spain’s huge housing bubble lead to a decade and a half of recession-free growth, growth which then came to a dramatic halt after the bubble burst. During the boom nearly five million migrants were “sucked- in” to keep the economy afloat, but now the boom is over many are unemployed and the authorities have no clear idea what to do about this problem.

Initially the new migrants became contributors to the social security system, thus helping to make the PAYGO pension system more sustainable. But as these very same migrants now queue up at the labour offices many Spaniards are asking whether this was the best way to do things.

The Price Of Doing Nothing

You can find the full presentation here.
Posted by Edward Hugh at 4:08 AM