Small Nations and the Economic Crisis

Exporting Your Way Out Of Trouble Under A Currency Peg – Open University of Catalonia , Presentation during the Conference “Economic Crisis in Small Countries”, Barcelona, Catalonia, May 2011 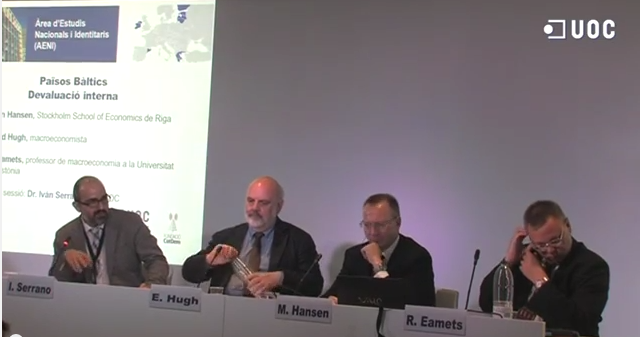 Baltic Blues - Exporting Your Way Out Of Trouble Under A Currency Peg
Edward Hugh  - Barcelona: May 2011

In this presentation I will argue that
• Despite some early encouraging signs, it is far from self-evident that the so called “BELLS” (Bulgaria, Estonia, Latvia and Lithuania) are going to be able to export their way out of trouble.
• Unresolved issues may leave a legacy. One which could weigh down any recovery and lead to more serious problems during the next recession In particular: a) The Existence of a Debt Overhang b) The Impact of Ageing and Declining Populations
• The “internal devaluation” process may have been underambitious and allowed to come to a halt far too soon.

Worrying Signs In Latvia Despite a substantial increase in exports

While Industrial Output Languishes And Investment Also Fails To Recover

So What Is The Problem? Well the first problem is debt. How can heavily indebted societies claw their way back to sustainable growth. The Key Point To Grasp – This Process Is Structural, Not Cyclical

The Problem Now Is That The Credit Bust Economies Are Now Totally Export Dependent For Growth Simplifying: GDP = Consumption + Investment + Government Spending + Net Trade Which means growth in GDP = Growth In the sum of these factors Growth in Net Trade = Growth In Exports – Growth in Imports

Why Is This A Problem? It Is A Problem Because Your Underlying Trend Growth May Start To Slow And You Still Have To Service The Debts Accumulated When You Were Growing More Quickly.

It Is Also A Problem Because Growth In A Modern Economy Either Comes From Credit Expansion (internal demand) or Exports (paying the credits back). Consumption out of current income isn’t a huge part of the picture.

Population Ageing – A Unique Historical Challenge The economic and social implications of the ageing process are going to be profound. According to a recent report from credit rating agency Standard & Poor’s: • the process is seemingly irreversible. • No other single force is likely to shape the future of national economic health, public finances, and policymaking over the coming decade Strangely, the issue receives only a fraction of the attention that has been devoted to global climate change, even though, arguably, ageing is a problem our social and political systems are, in principle, much better equipped to deal with.

As far as we are able to understand the issue at this point, population ageing will have major economic impacts and these can be categorised under four main headings: i) ageing will affect the size of the working age population, and with this the level of trend economic growth in one country after another ii) ageing will affect patterns of national saving and borrowing, and with these the directions and magnitudes of global capital flows iii) through the saving and borrowing path the process can influence values of key assets like housing and equities iv) through changes in the dependency ratio, ageing will influence pressure on global sovereign debt, producing significant changes in ranking as between developed and emerging economies.

While population ageing is universal the short term impact will be much more localised. The pace of aging varies greatly across countries and regions. The effects of the process are expected to be most pronounced in those countries that remained complacent in the face of ultra-low fertility rates (total fertility rates of 1.5 and under), which in effect means Japan, the German speaking countries and much of Southern and Eastern Europe.

Another way of looking at these demographic changes is in terms of the dependency ratio, which can be defined in a number of different ways depending on the problem being addressed.

Eastern Europe Will Be Very Hard Hit Among emerging economies, the East of Europe stands out as by far the worst case in the short term. In 2025, more than one in five Bulgarians will be over 65 - up from just 13 percent in 1990. Ukraine’s population will shrink by a fifth between 2000 and 2025. And the average Slovene will be 47.4 years old in 2025 – one of the oldest populations in the world.

The Demographics Of Export Dependency As I have been arguing, if economies transit from being consumption driven to export driven, and it would appear that the process is not merely random, then we are not talking about choosing between options or “growth models”. There is not a choice here, since there are deep underlying structural dynamics at work, and these dynamics seems to be intimately associated with the dynamics of the demographic transition

You can download the full presentation here.
Posted by Edward Hugh at 10:39 AM