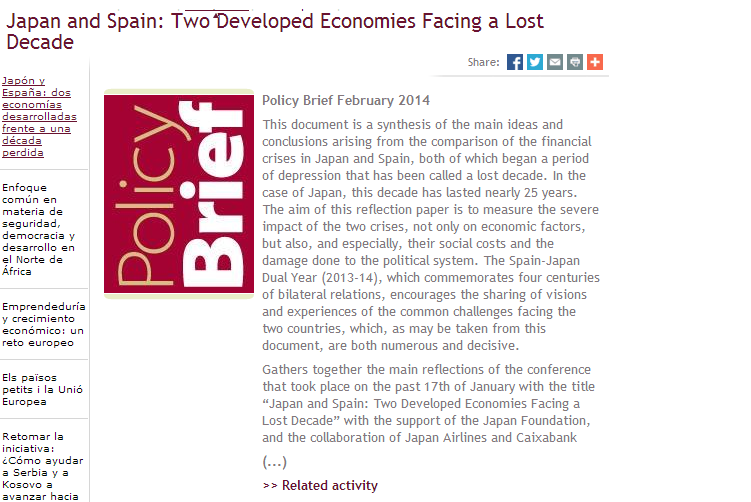 A new craze is sweeping the planet. Known by the title "Abenomics" over the last couple of years it has been steadily gathering adepts in financial markets across the globe. Despite the fact Abe's move fits comfortably within the austerity vs growth policy axis, at the heart of the new approach lies not a strategy to directly create growth per se, but rather one to try to induce inflation. For those who have not been following the Japan saga as it has developed over the last twenty odd years this whole debate may seem like a strange way of thinking about things. After all isn't inflation supposed to be a bad thing, one central banks are supposed to combat? And how can a country possibly become more ever more competitive by force-feeding itself inflation?

Of course, falling prices are not necessarily in-and-of themselves a bad thing - as any old consumer will tell you - since products get cheaper and cheaper with each passing day. So the run of the mill consumer might find life in Japan quite a pleasing and desirable thing, especially if that particular consumer happens to be retired and living on a fixed income derived from savings as indeed many contemporary Japanese actually are. Falling prices only really become a problem in a more general macroeconomic sense if they lead people to postpone consumption, and if this postponement becomes self-perpetuating in a way which leads prices to continually fall, as the combination of constant productivity increases and stagnant demand serve to produce perpetual oversupply. Falling prices also represent a nasty headache for policymakers since while prices go down the value of accumulated debt doesn't, and herein lies the rub. So additional "stimulus" which doesn't lead to increasing nominal GDP simply pushes the sovereign debt even farther along an unsustainable trajectory.

As everyone now recognizes and accepts Japan has a rapidly ageing population and an ageing and contracting workforce. This is the end result of several decades of very low fertility. The number of children in Japan fell to a new low in 2013, while the amount of people over 65 has reached a record high as the population ages and shrinks. This demographic background, which has really been obvious to demographers for years, has only lately come to be regarded as a significant factor in the "Japan problem" by economists. This neglect has most probably been due to the influence of a deep seated predisposition among adherents of neoclassical growth theory to think that population dynamics don't fundamentally influence economic performance in the long run. For many years the Japan phenomenon was simply seen as a classic example of what Richard Koo terms a “balance sheet recession” wherein the need for the private sector to deleverage from excessive indebtedness leads to a form of structural under-consumption.

Perhaps the most important thing which the whole Abenomics episode has brought to light is the urgent need to bring the existing corpus of economic theory somehow up to date with our modern realities. Despite all the talk of policies for "growth, growth, growth" a simple look at the population outlook in OECD countries and especially the potential work force numbers suggests that, at some point or another, economic growth will turn broadly negative. So the real point is there is an experiment being conducted in Japan, but the experiment isn't Abenomics (which I suspect won't work, and could end badly). No, the experiment is about learning to grow old with dignity, not as individuals, but as societies. It is about managing debt in a time of deflation, about giving opportunities to the young, even while the force of the ballot box rides with the old, and about finding ways to ease that rate of work force decline to give some additional room to allow productivity to help, which means both immigration and helping the young - at they are the ones who start families.
Posted by Edward Hugh at 12:10 PM No comments: